A family whose detention has focused anger over Australia's asylum-seeker policies have won a four-year battle to return to their Queensland town.

Australia's new government granted visas to the Murugappan family, allowing them to temporarily live and work in Biloela.

The Tamil family has been in immigration detention since 2018 after their claim for asylum was rejected.

The case sparked an outcry and locals in Biloela campaigned for their return.

Legal challenges to the decision to deny them protection remain before Australia's courts.

Under controversial policies, Australia can hold asylum seekers like the Murugappans in indefinite detention while it assesses their refugee claims or takes steps to deport them.

But Prime Minister Anthony Albanese - who won an election last Saturday - said his government would make an exception for the Murugappans.

"We are a strong enough society to say that we should not treat people badly, in order to send a message to others," he said on Friday.

"It's beyond my comprehension how this has gone on for so long, at enormous cost."

But the family's supporters have called for the government to use their powers to grant them permanent residency, instead of temporary visas.

"Their journey home to Bilo marks the end of a long, painful chapter in their lives, and the beginning of a lifetime of healing and recovery," family friend Angela Fredericks tweeted on Friday.

"But this family will never be safe until they have permanency in Australia."

Priya Nadaraja and Nadesalingam Murugappan arrived in Australia on separate boat trips nearly a decade ago, and sought asylum. They said they feared persecution in Sri Lanka because of their Tamil ethnicity.

Each settled in outback Biloela, where they met, married and had two girls - Kopika, seven, and Tharnicaa, four.

But the government detained them in 2018 after ruling the family had no legal right to be in Australia.

Locals in Biloela fought for them to stay, kicking off a campaign that won national support and the backing of MPs from across the political spectrum.

The family has also waged a long legal battle for their claim to asylum to be reassessed.

After two attempts to deport the family, a court injunction in 2019 ruled they could not be removed from the country until their case was resolved.They have spent more than 1,500 days in immigration detention - much of it on Christmas Island, an Australian outpost in the Indian Ocean.

Last year, they were moved from the island to community detention in Perth after Tharnicaa needed urgent medical care.

The family told the BBC last year that the conditions of their prolonged detention - and separation from their support base - had caused them significant harm. Priya said the years in detention had left her with depression and very little energy.

Meanwhile, Tharnicaa - who was just nine months old when the family was detained - had surgery in 2019 to remove teeth that had rotted due to poor nutrition. She also spent two weeks in hospital last year for another illness.

Australia argues its strict policies on asylum seekers prevent human trafficking and deaths at sea, but the UN has criticised its approach as inhumane. 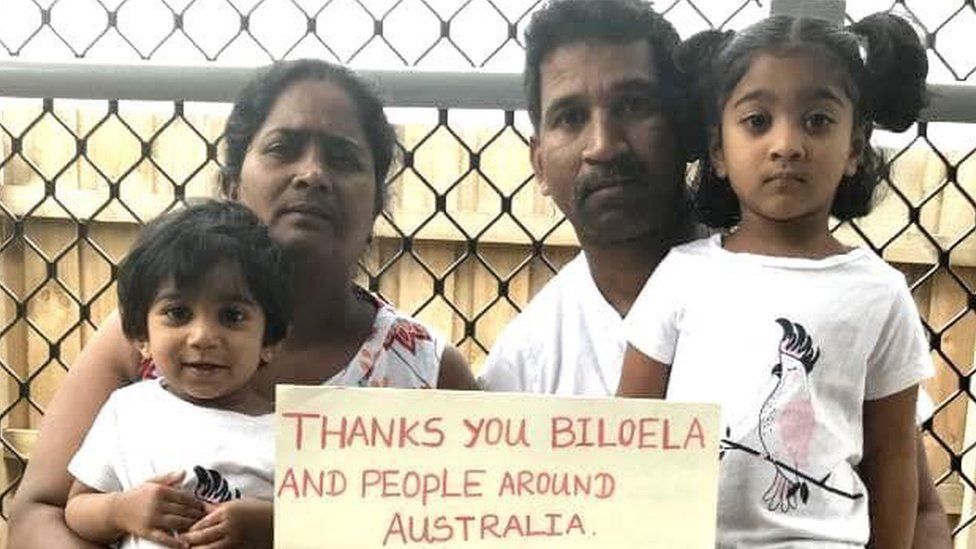 Last modified on Sunday, 29 May 2022 20:42
More in this category: « Texas shooting death toll increases to 21 Life sentence for Kashmiri separatist leader »
back to top

New cabinet portfolios : Why the delay?

Police arrest at least 84 after protest in Colombo